Ausgrid a hive of activity

A patch of Ausgrid land in Newcastle is the new home for thousands of bees being used for world-first research to improve crop pollination and food security.

Ausgrid is partnering with Australian AgTech startup Bee Innovative, which has developed ground-breaking technology that helps farmers increase the number of crops being pollinated.

“Bee Innovative approached us to house 30 hives because it’s the perfect environment for their research bees to rest during the cooler months,” Mr Wilson said.

"Not only are their hives secure there, they’re surrounded by an urban environment which has a reliable supply of food and water for the bees before they get taken to fields in Spring.”

Bee Innovative co-founder Kate Lyall said honey bees are like athletes – in winter they need to rest, and the Ausgrid land is the perfect place to do that.

“Come Spring, we’ll be taking these bees out to pollinate nuts, cherries, avocadoes and apricots, among other things,” Ms Lyall said.

“With our radar technology called BeeDar, we’re able to track the bees to see which crops are being pollinated and which ones are being missed. Then farmers can get their bees moved to different areas in real time.

“It’s better for farmers because usually they just have to wait and see which crops end up flowering, but by then they’ve missed the pollination opportunity for the season. With the BeeDar, we’re really able to help our food producers improve their yields.”

A safety barrier has been installed around the hives to ensure Ausgrid workers are safe when they’re at work, and they’re in a quiet area of the site to limit human interaction.

“It’s great to be able to partner with Bee Innovative. They’re an impressive Australian startup, that has developed world-first technology to support both the environment and food security,” Mr Wilson said.

A second Ausgrid site is being considered to house another bee colony for research later in 2020.

In 2019, Ausgrid welcomed several hives of 15,000 native stingless bees onto its land in Matraville as part of a pilot project to rehabilitate critically endangered Eastern Suburbs Banksia Scrub and has been exploring the further installation of hives at other Ausgrid sites.

May 20 is the United Nations day designated as World Bee Day and Ausgrid is proud to be able to support the survival and population growth of these pollinators.  This project aligns with Ausgrid’s support of UN Sustainable Development Goal 11 – Sustainable Cities and Communities.

Photos of the new bee hives at Ausgrid’s Newcastle site are available to view here. 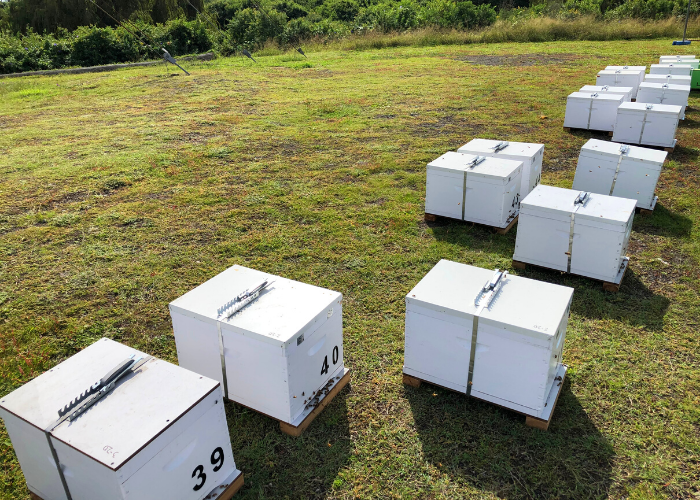