Building treehouses and forts is a rite of passage for many Australian children, but Ausgrid is reminding the public of the need to build them safely and well away from powerlines.

Earlier this month an Ausgrid employee was riding his bike in Balgowlah in Sydney's Northern Beaches when he noticed a treehouse on the median strip. It had been built in a tree under live powerlines and its roof was centimetres away from the wires.

Because the treehouse was built on the median strip the employee wasn’t sure who was responsible for it. He tried doorknocking the closest house but didn’t get an answer so called it in to Ausgrid’s safety team.

They immediately notified Northern Beaches Council who attended the site along with Ausgrid and barricaded the tree and put up warning signs. Ausgrid also installed tiger tails on the wires so they were clearly visible.

The treehouse was dismantled a few days later.

General Manager Field Operations Sam Sofi says the incident is a timely reminder that everyone needs to be aware of the dangers of live wires in all kind of situations – not just after storms or other weather events.

“What started out as innocent fun for local kids could very easily have become a tragedy if someone had come into contact with those live wires,” Mr Sofi said.

“We understand it’s school holidays and kids are looking for fun and adventure but the last thing we want is for someone to be seriously hurt or even killed because they came into contact with a live wire.

“It’s just luck one of our employees happened to spot the hazard and did the right thing and reported it.

“We don’t want to be the fun police. Building forts and climbing trees is what Australian summers are made for, but we just urge parents to check where their kids are playing and stay clear of power poles and power lines.” 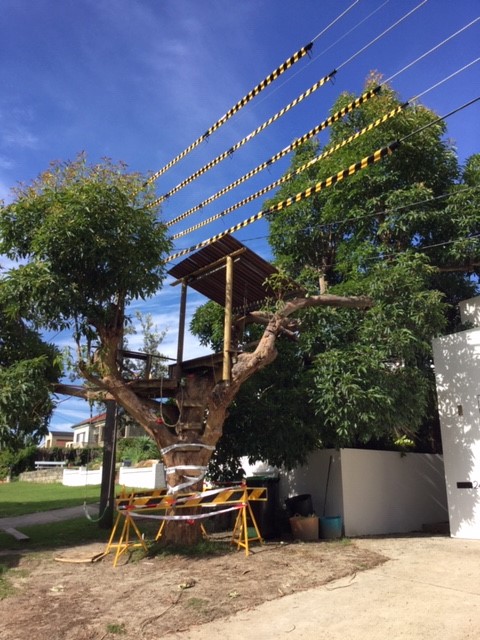 ABOVE: The dangerous treehouse spotted in Balgowlah